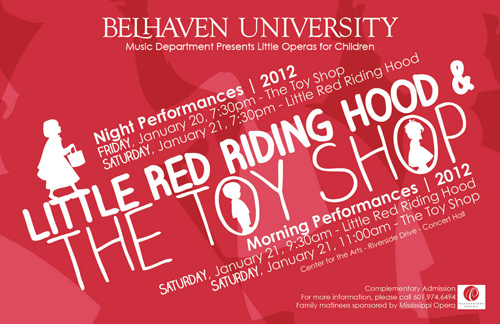 January 6, 2012 (Jackson) - The Belhaven University Music Department and the Mississippi Opera present Little Operas for Children: Little Red Riding Hood and The Toy Shop. These fun-filled operas by composer Seymour Barab will be playing day and night, January 20-21 at the Belhaven Center for the Arts, Concert Hall.

Dr. Christopher Shelt, Professor of Voice, Church Music & Choral Activities, said, “These operas are approachable and engaging for all ages and are intended to introduce people to an art form that they’ve never experienced. These particular comic operas from Barab are not only warm-hearted, hilarious and charming stories, but they provide an educational experience that young people can connect with and gain a knowledge of the operatic genre.”

Belhaven’s vocal art students will perform Barab’s favorite two comic operas. Before the night performance on Friday, the vocal art students will give a special, educational performance for the Magnolia Speech School and Power Academic and Performing Arts Complex (APAC). Students from both institutions will get the chance to talk to the Belhaven performers and learn more about operas and the art behind the production.

Little Red Riding Hood and The Toy Shop are treasured comic one-act operas conducted by American composer Seymour Barab (1921- ). Barab's work in musical theatre has made his operas very popular and consistently performed, especially his comic one-acts and those for young audiences. He received a Lifetime Achievement Award from the National Opera Association.

Barab's Little Red Riding Hood was the first American opera ever performed in China and The Toy Shop, commissioned by the New York City Opera, was performed at the Kennedy Center in Washington, D.C.

These opera performances are free to the public and fun for the whole family.