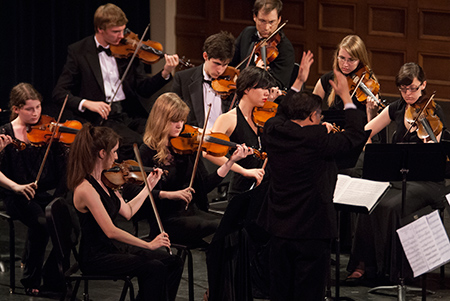 March 18, 2013 (Jackson) - The upcoming Belhaven Strings Concert will showcase some of the top Belhaven string players on Friday, March 22, 2013 at 7:30 p.m. in the Center for the Arts Concert Hall.

Belhaven is one of a few places you can enjoy free symphonic and orchestral concerts in Jackson. The performance will feature students and alumni musicians from the Belhaven Music Department and will showcase a colorful variety of string solos, string chamber groups and Belhaven String Chamber Orchestra.

Mr. Song Xie, Associate Professor of Music, said, “The audience will get to hear from students who are at the highest level of string education in the state of Mississippi and many of the performers are competition prize-winners.”

The music performed will be all high-level string compositions from Ravel, Prokofiev, Kreisler, Bartok, Rachmaninoff and more. "A special part of this concert is the demonstration of creative interpretation which you will see three of our top violinists play the same piece with a completely different personal style,” adds Xie.