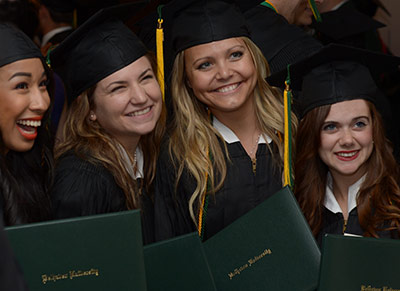 May 20, 2015 (Jackson, Miss.) - Families and friends gathered to celebrate the Class of 2015 at the Belhaven Commencement Ceremony on May 9, 2015. This celebration marked the graduation of 850 Belhaven students throughout the year.

Mrs. Robbie Hughes was the commencement speaker for both ceremonies. Mrs. Hughes grew up in Dallas, Texas and went to Texas State College for Women.  She worked for Delta Airlines and H.L. Hunt Oil & Gas Co.  She started teaching Sunday school when she was 19 and taught for over 40 years.  After she and her husband, Dudley, moved to Jackson, she was the host of a TV talk show on WJTV. Mrs. Hughes was a delegate to the National Republican Convention and she served on their Platform Committee. She then served as a National Elector for the National Republican Convention. She is a former member of the National Conservative Political Action Committee (NCPAC) and the House Majority Trust.  In 2009, the Hughes were recognized as Philanthropists of the Year by the Mississippi Chapter of the Association of Fundraising Professionals.

Watch both graduation ceremonies below.