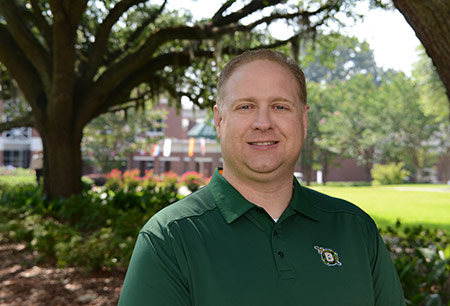 July 28, 2014 (Jackson) - Belhaven University announced that Ben Burge has been named the Director of Marching Band.  Burge comes to Belhaven after successful stints as a marching band director in the Mississippi public school system. "I am very excited about being at Belhaven," said Burge. "I look forward to working with the students and being a part of the Blazers family."

"Ben brings a great combination of energy and experience to our Marching Band program," said Little. "That will translate into increased school spirit and lots of fun for our students."

Burge is a member of several professional organizations that include the Mississippi Bandmasters Association, Phi Beta Mu, Phi Mu Alpha, CBDNA, NBA, and has served on the board of directors for several regional clinic associations. He is a past president of the Capital District Band Directors Association. He has also served as a clinician and judge for various clinics and contests. Ben is currently completing the Doctor of Education in Leadership from the Riley School of Education at Walden University.  He resides in the Flowood area with his wife Cindy and children, Max and Emma.