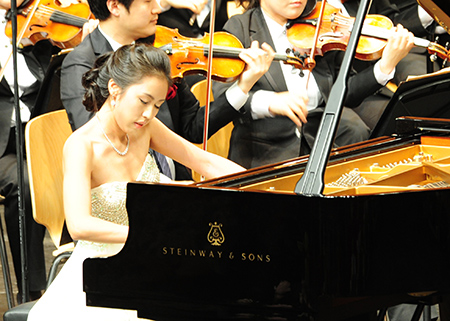 September 6, 2012 (Jackson) - Over the summer, a group of Belhaven University students, staff and faculty traveled into the country of South Korea. Each trip had a separate mission, but together had the same goal of representing Belhaven and honoring God overseas.

The first portion of their trip was spent at Dong-Ah Institute of Media Arts (DIMA) a sister university located in Anseong, Korea. While at DIMA they taught dance workshops, performed, worked with DIMA students on their creative film projects. The dance team worked with DIMA's professional faculty and staff to create a dance for camera work that was filmed in a variety of locations on campus and in town.

Cynthia Newland, Associate Professor of Dance and Chair of the Dance Department, said, "We departed Jackson with the aims to encourage Korean Christians and introduce Christ to non-Christians through dance presentations, dance workshops and relationships. Returning to Jackson we were confirmed that our goals were met; however, we left the country encouraged and blessed, experiencing God's creation in unique cultural forms and these precious memories will last a lifetime."

Increased efforts to gain more of an international presence on campus led Belhaven’s President, Dr. Roger Parrott and the Director of International Relations, Cliff McCardle on a trip to South Korea. Their itinerary led through 12 cities, where they spoke at high schools, colleges, seminaries, churches and communities. By invitation, and through the influence of Dr. Billy Kim, Chairman of Far East Broadcasting-Korea, they were given opportunities to tell others about Belhaven.

Through speaking engagements and radio interviews on the Far East Broadcasting network, thousands across Korea learned about Belhaven University. McCardle, said ”Before we returned to the U.S. the Belhaven Admissions Department began receiving phone calls and e-mails.”

Professor of piano, Sylvia Hong who is originally from South Korea, traveled to Busan, South Korea with her husband and pianist Michael Rector. Together they performed a concerto with the Mokpo Symphony and gave two-piano concerts. She also led master classes and her husband gave lecture-recitals. The concerts were sold-out and enthusiastically received. The Far Eastern Broadcasting Company (FEBC) broadcasted a radio interview with Hong and during the interview she had the opportunity to talk about Belhaven and the music programs.