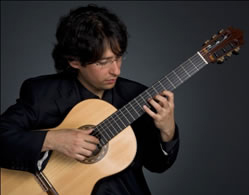 January 31, 2012 (Jackson) - The Preston Chamber Music Series: An Evening of Diamonds continues to present wonderfully stirring concerts, and the Pablo Garibay Guitar Recital is no exception.

This guest artist recital on February 10 will be a highlight of the 10th Annual Mississippi Guitar Festival which is the state’s only collegiate conference on the art of classical guitar.

Mexican guitarist Pablo Garibay is an international, prize-winning guitarist who has achieved world-class status as a young virtuoso. Garibay captures the heart and soul of Mexican and Latin American music in his style.

Amy Houghton, Adjunct Professor of Classical Guitar, said, ”If you never heard the harp-like tones of a classical guitar, this is your opportune moment. Pablo Garibay is a rising star in the world of classical guitar. A native of Mexico, Pablo has traveled, studied, and competed internationally, and now he is coming Jackson. With the pristine musicality of a master, Pablo draws the richest melodies from the music. His tone is rich, his interpretation immaculate, and his rare, sensitive style lacks for nothing. Don’t miss this chance to experience an artist of the highest caliber.”

Tickets are $10 for general admission, $5 for seniors and free for students with ID, and admission is free for Belhaven faculty, staff and students.

This concert is just one of the many exciting events during the 10th Annual Mississippi Guitar Festival. Students have the opportunity to work with MS guitar faculty in lessons, and attend classes focusing on technique and repertoire. Other highlights of the festival include master classes, guitar competitions and a concert given by the faculty of participating schools.