Music Student Performs in Tour Across Canada and England 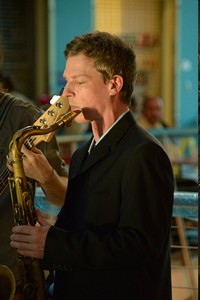 July 29, 2013 (Jackson) - Michael Adkins is only a junior at Belhaven, studying for his Bachelor of Arts in Music Composition, and is already showcasing his musical talent around the world. Adkins, who plays the saxophone, teamed up with three other veterans of Jazz music for a tour that took them to audiences in Toronto, Kitchener-Waterloo, London, Sarnia, Vancouver, Calgary, and Edmonton. The concert featured music by Thelonious Monk, Paul Motian, and Duke Ellington, along with original compositions by Adkins.

The quartet includes Kevin Turcotte who is a popular jazz artist in Canada known for his mastery of the trumpet. Jim Vivian, a veteran bass player, joined the quartet for the tour, along with Ian Froman who is a Juno-award winning drummer.

This year Adkins was awarded the Exemplary Instrumental Music Award by the Belhaven Music Department. Before he studied at Belhaven, Michael lived in New York City working as a saxophonist and composer. In 2005, Adkins released his debut album, Infotation, with his original compositions which would be followed by a second album, Rotator, featuring the legendary Paul Motian on drums alongside, Russ Lossing on piano and John Hebert on bass. The 2008 release of Rotator was chosen as Wire Magazine’s Jazz improve recording of the year.