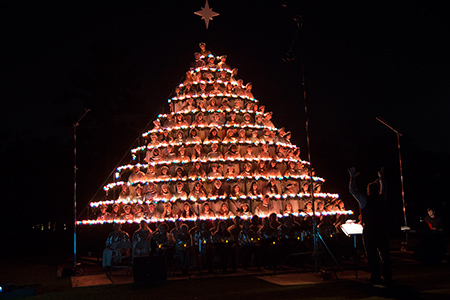 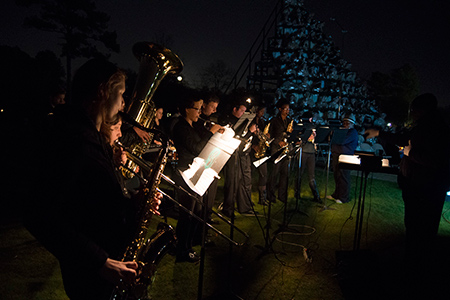 November 14, 2013 (Jackson) - Belhaven’s Singing Christmas Tree began in 1933 and is the first and oldest outdoor singing Christmas tree event in the country. This year will mark the 81st anniversary of the tree. Both performances on December 6 and 7 are free to the public and will take place at the Belhaven University Athletic Bowl at 7:30 p.m.

A new 35-foot tall wood and metal tree structure holds up to 100 men and women singers. Christmas tree singers hold large strands of LED lights, which change colors in various patterns and sequences according to the character of each Christmas carol, creating a visual spectacle for the listeners. Certain traditions have become expected elements to the tree. An auditioned soloist is positioned under the star located at the very top of the tree. This honored soloist performs "O Holy Night" near the Tree's conclusion. Other traditions include artificial snowfall during "White Christmas" and humorous "insider jokes" interposed into the lyrics of "Rudolph the Red Nosed Reindeer" and other Christmas favorites.

The annual event started as an idea by a former music professor, Mignonne Caldwell, who wanted to share the concert with others in the community. Caldwell moved the concert outside between Preston and Fitzhugh Halls, then she recruited college engineer, Mr. C. V. McLain to construct the first wooden tree frame for the choir to stand on.

Ms. Bettye Quinn, Associate Professor of Education and Director of Elementary Education, remembers seeing the Singing Christmas tree for the first time. Quinn said, “I remember when I was three in 1937 and a family friend brought me to see the Belhaven singing Christmas tree for the first time. At the time the tree was a group of 50 girls on a platform between the columns, they had on white robes and held bright lights that reflected into the lagoon. It was just a glorious sight for a little child to see. I have come every year since to see the Singing Christmas Tree.”