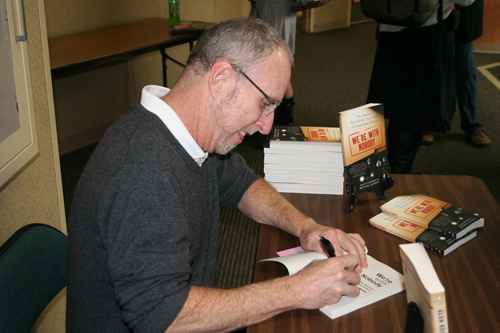 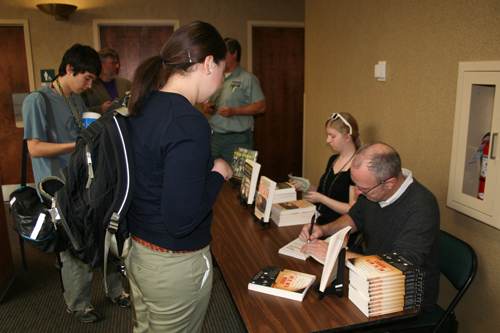 February 28, 2012 (Jackson) - Alan Huffman, published author, journalist, and political researcher, shared his new, co-authored book, We’re With Nobody and talked with students about current politics and writing. Huffman visited Belhaven University before his flight to New York to be on the Daily Show with Jon Stewart.

Dr. Randall Smith, Director of Creative Writing, said, “At Belhaven, we try to get our students in touch with today's great writers and thinkers and Alan Huffman is no exception. Fiction writers and poets have walked through our doors, but it’s not often we get to hear from an acclaimed journalist and creative non-fiction writer.”

His latest book, about the world of political opposition research, opened up an insightful discussion between the author and students involved in Belhaven University’s Political Science, Creative Writing, and History Departments.

Huffman explained his history as a writer and the development of each of his books. Many students joined in the conversation like Jacob Rowan, a Belhaven creative writing student, who said, “He stressed the importance of credible sources and encouraged us to write true to life, whether that was by writing about actual events or creating characters fiction based on observing the world.”

Huffman’s other books include Sultana: Surviving the Civil War, Prison, and the Worst Maritime Disaster in American History and Mississippi in Africa: The Saga of the Slaves of Prospect Hill Plantation and Their Legacy in Liberia Today.

Rowan adds, “One of his strengths as a writer is his desire for solid research and all of his books came out of thorough study. It was cool to see a writer making a living, creatively by using the research skills he learned writing for a paper and managing to find time to publish books.”

While discussing political research, Huffman told students that he seeks to make the election process very open and the candidates accountable. He is known for being partisan and fair-minded. Many times he is asked to conduct research on a political opponent and he always ends up researching the persons who hired him.

The creative writing department sponsored the event and all proceeds from book sales at the event went to the Save Fitzhugh Hall Fund.

The event took place at Belhaven’s Student Center Theatre on February 17. Huffman is currently touring to promote his latest book.