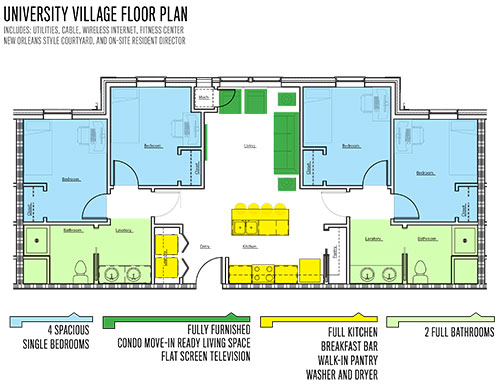 May 6, 2014 (Jackson) - During the Belhaven University commencement on Saturday morning, May 3, the president announced exciting plans for new on-campus apartments thanks to a special $4 million gift. Below is the full announcement from Dr. Roger Parrott:

As you know, we are in need for housing space for students. Our enrollment pushed our housing to the absolute capacity last fall. For over a year we have talked, dreamed, worked, and prayed for additional housing that would allow us to house more students on campus, but do so in a unique, on-campus living apartment that offers a very different alternative for students who are wanting something other than the type of residence hall rooms we now offer. So on faith, plans were drawn for an apartment building that would house 132 students.

But the $8 million cost to build this project has kept this dream out of reach . . . until now!

A week ago, Mrs. Robbie Hughes, a wonderful friend of Belhaven was prayerfully guided by the Lord to join with us in this vision for new student housing and has made an overwhelming commitment of $4 million for the project. When I received the news, I was completely speechless – because this changes everything. To God be the glory, great things He has done!

Mrs. Hughes wants all of the honor and our thankfulness to go to God. We praise Him for His leading that made this gift possible. The Lord often does His work through Godly people and Mrs. Hughes is a woman with the vision to see over the horizon, a spirit of trusting stewardship and a passion to make a significant difference for Kingdom work.

Robbie and her husband Dudley were also pleased to make this gift because of their affection for the people of Korea. A Korean War veteran, it was Dudley's invention of a new machine gun that changed the course of the war and brought freedom to the people of South Korea. So, it is especially thrilling that this new residential hall, named to honor Dudley’s service in Korea, will be constructed just steps away from the new Dr. Billy Kim International Center – which is named in honor of a “house boy” from the Korean War who was saved buy a soldier and sent to the USA as a student who eventually returned to Korea to become one of God’s most influential spiritual leaders in Asia.

Dr. Kim is so generously working with us to raise $4 million for this new international center and the $4 million gift from Mrs. Hughes will allow us to create a complex for international education, valued at $13 million when it incorporates the current pavilion linking the two buildings. It is just remarkable these two young men from Korea, a lifetime ago, are now joined together for a Korean/America bond 65 years later and around a center of global Christ-honoring education, right in the heart of Belhaven’s campus.

We are calling this new building the University Village, which is fitting for a residence focused on global learning and linked so deeply with all we will be doing in the new Dr. Billy Kim International Center.

The building will be unlike anything we have enjoyed before with 33 high quality apartments. Click here for room layouts and features. The design will include:

• Four bedroom apartments – each resident will have a large private bedroom • Two full baths, a kitchen and living room • Breakfast bar and walk-in pantry • Fully furnished rooms that include amenities like flat-screen televisions, washers and dryers • All utilities (i.e. cable and internet) are included in the semester rental price, along with campus security and campus parking • Fitness center on the ground floor • A beautiful “New Orleans-style” courtyard • Resident director apartments and offices on the second floor • Three studio apartments for visiting scholars

The U-shaped, three story building will be constructed on the site of the tennis courts, right in the heart of campus. Belhaven will have a temporary home for tennis until new courts can be built. The exterior will be whitewashed brick that pulls together Belhaven’s brick and white stucco buildings in an elegant blend of architecture. University Village will have secure, individual suites and be available for groups of either men or woman students to rent. Summer rentals will also be available for students. Housing fees for those living in the building will not include the campus meal plan because they will have a full kitchen.

We are thankful that because this building was fully planned a year ago, the architectural drawings that would normally take months of preparation are already completed. This allows us to begin construction planning next week, with on site construction activity to begin sometime near mid-summer. The University Village will be completed for students to move in during August, 2015.

Dale Partners Architects P.A. designed the building and Mike Harrell of Probity Contracting Group will be the builder. This is the same team that put together the Fitzhugh Hall building. They did an outstanding quality job and were very careful stewards of our resources.

The magnitude of this $4 million gift allows us to secure a construction loan from local banks in order to get the building started right away! Acting with the authority given to them by the Belhaven Board of Trustees Bylaws, our Executive Committee of the Board met last week to unanimously approve the construction project and the construction loan.

This gift for the new University Village is a remarkable capstone testimony to this year's theme verse for this academic year we complete today: “God is our light and our protector. He gives us grace and glory.”