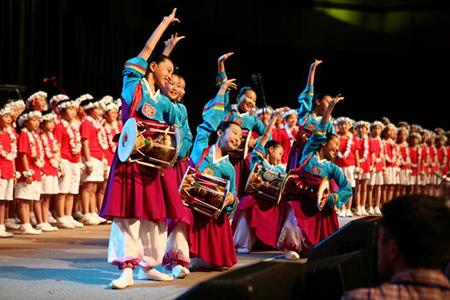 September 25, 2012 (Jackson) - The Far East Broadcasting Company (FEBC)-Korea Children’s Choir and Dr. Billy Kim will visit Jackson for two special performances on October 2 in the Belhaven University Center for the Arts. The morning concert is for Belhaven students and will start early at 10:20 A.M. The night concert is free to the public and begins at 7:30 P.M.

Both concerts will feature the children’s choir and influential speaker, Dr. Kim. The night performance will feature special guests and renowned pianists Sylvia Hong and Michael Rector. The choir will collaborate with Hong and Rector. Hong teaches piano in the Belhaven University Music Department and Rector is a pianist, teacher, writer, lecturer and advocate for classical music; both have performed around the world.

International Christian statesman, pastor, broadcaster and influential speaker Dr. Billy Kim has inspired thousands with his story and will speak at the performance. He became the first Asian to serve as the president of the 40 million-member Baptist World Alliance, and built an international media network at Far East Broadcasting-Korea where he serves as Chairman of the Board. Today, his ministry continues to touch thousands of lives through preaching and broadcasting.