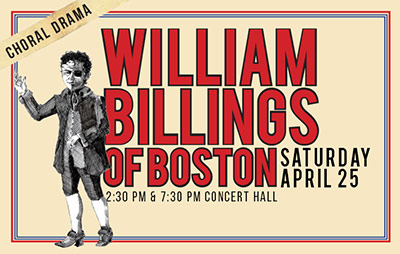 April 20, 2015 (Jackson) - The choral drama, William Billings of Boston is on April 25 at 7:30 p.m. in the Center for the Arts Concert Hall. This free concert will portray the life of William Billings, an early American composer, through the art of music and theatre.

“The Choral Drama William Billings of Boston is a unique concept for a concert,” said Dr. Christopher Shelt, Professor of Music. “Through theatrical arts we get to see a portrait of this significant early American composer while hearing a concert of his music.”

The Belhaven Concert Choir, Belhaven Chorale and a full company of actors will help bring to life the story of the man who wrote the song that stirred the spirit of American Revolution. Dr. Shelt adds, “William Billings was a larger than life character and has many funny stories to share. He was a colorful, witty, humorous, unkempt composer and vocal educator that changed the face of American music. The concert will be both educational and entertaining.”