Musical, The Drunkard, Debuts at Belhaven 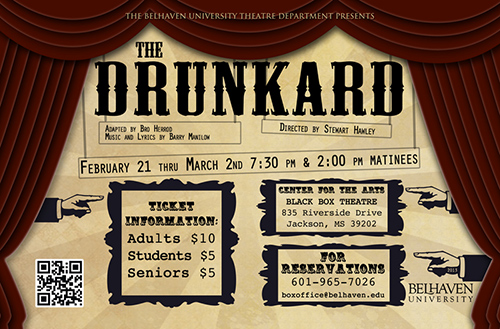 February 15, 2013 (Jackson) - The Drunkard is a musical that will debut February 21 – March 2 at 7:30 p.m. in the Belhaven Blackbox Theatre. The musical, presented by the Belhaven Theatre Department, is based on the 19th century, world-famous melodrama by W.H.S. Smith and will feature music and lyrics by Barry Manilow. Saturday matinees on February 23 and March 2 are available and will start at 2:00 p.m.

“We're excited about this show because we get to jump back in time a bit and explore the world of vaudeville style performance, the broadness of melodrama and the variety of musical interludes and comedy bits all within one show. It's been a lot of fun in rehearsal and we can't wait to share it with audiences,” said Joseph Frost, Associate Professor of Theatre.

This musical centers around the story of the virtuous Mary, the dastardly landlord Mr. Cribbs and Edward’s journey dashing from the clutches of drunkenness. With vaudeville bits and campy musical interludes, this show will send the whole family home humming “Do You Wanna Get Saved?”

Stewart Hawley, Assistant Professor of Musical Theatre, is the director of this musical and said, “This play is a classic redemption play in which we learn that through Christ our lives can be redeemed and changed. Through the story of the life and drunkard and his downward spiral into decay, he still is not far away from the love of God. Come and revel in the hope of seeing a life change and evil thwarted.”

Call 601-965-7026 or email boxoffice@belhaven.edu for reservations. General admission is $10 to the public, $5 for students and seniors. There is complimentary admission for Belhaven faculty, staff and students.